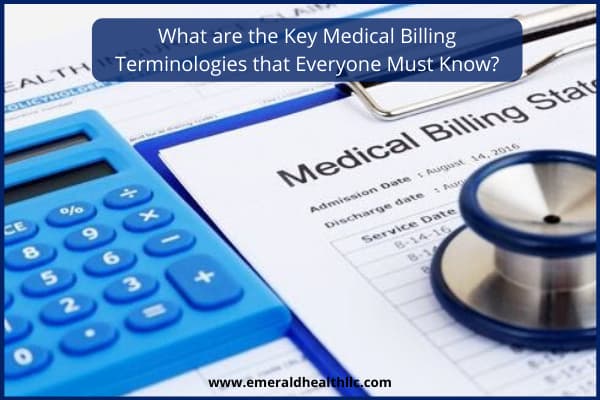 What are the Key Medical Billing Terminologies that Everyone Must Know?

Medical billing is a complicated task. Even the medical billers find it difficult to create a simplified bill. There are multiple terms, which the common people don’t know at all. We are listing some of the key medical billing and coding terms, which will help you to understand the bill from the hospitals.

The appeal is the legal challenge to the decision made by the insurance provider. When the insurance company denies to pay for the bill or partly pays the same. The appeal status appears on the medical bill provided to the patient.

ATD or Applied to Deductibles

AOB or Assignment of Benefits

The AOB or Assignment of Benefits is the terms used to indicate the payment of the bill from the insurance company by settling the claim. Usually, this term is used when the payment is processed and sent to the hospital after filing and claims and completion of the processing.

Charity care is a free service to patients. The patients who cannot afford certain medical procedures can apply for charity care. In this, the insurance company will pay for the additional costs even if the policy can’t cover the same.

A clean claim is the perfect insurance claim, which contains no errors. The clean claims are pretty rare, and most of the time, they are processed within no time.

As the name suggests, Co-Insurance stands for the division of the insurance percentage between the two parties. The second party can be another insurance company or the beneficiary himself.

A deductible is nothing but the term used to explain the amount that the user has to pay for starting the insurance cover. It’s known as the down-payment or first-premium in other countries.

Downcoding is the term used to identify the medical procedures that are not performed. The insurance company finds no evidence of the surgical procedures performed; then it will downcode. They will remove the code from the claim and process the insurance payment to the hospital.

The managed care plan is the insurance plan that covers the treatment from the authorized physicians and the hospitals. The specially authorized hospitals under the network are eligible to file the claims in this plan.

A non-covered charge is what the name suggests. It’s the charge that is not covered by the insurance companies. The charge has to be borne by the patient himself. The hospitals will recover this charge from your pockets.

UCR or Usual Customary and Reasonable

UCR means Usual Customary and Reasonable. It is the amount that is covered by the insurance provider. When the UCR is exceeded, the patient is liable for the extra charges incurred.

The medical billing is complicated, and we don’t know most of the charges for our bills. The medical terminology is essential to understand, as it helps to know how and why we are charged for receiving medical treatment. These are the common medical billing terminologies that you will spot on the hospital bill. Now you know the meaning of the same and can approach the medical insurance companies or the hospital for inappropriate billing or clearing some doubts.

Why Choosing to Outsource Medical Billing is a Wise Decision?

Benefits of Outsourcing Your Medical Billing